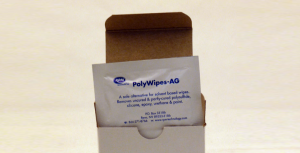 PolyWipes are a revolutionary product for anyone who needs to clean up uncured sealants, mastics, adhesives, silicones, paint, drilling oils and greases. They safely remove uncured or partly-cured adhesives and sealants by breaking the surface tension between the material and the substrate allowing for transfer to the wipe for disposal.

PolyWipes have a health rating of 0 and are NOT flammable and do not contain solvents or abrasives and have no odor! PolyWipes are available in convenient re-sealable tubs each containing 150 wipes.

PolyWipes can be used anywhere adhesives or sealants are applied. Industries that are benefiting from using our product include:

RPM Technology was formed in March 2003 as a result of marketing demand. The aviation and industrial markets did not have access to cutting edge sealant and adhesive removal products that can safely remove the industry's most tenacious sealants. The main product line of the company way PolyGone. Since then we have added additional products that all work together in the sealant marketing, cleaning market, and machining marketing, These lines are: Digesil, Di-Aqua, eOx, Poly-Wipes, DPI, and Petrol-Seal.

The Company consists of James Esposito, Parky May, Chris May with a combined experience exceeding 75 years in the chemical and aviation industries. RPM Technology leverages this lases and marketing experience with R&D to bring new and innovative products to the market place.

James Esposito is responsible for sales, marketing, and product development.


In addition to the management staff, RPM Technology has a team of professionals at their facility working together to ensure your order is processed correctly and in a timely manner.

Contact Us Using The Form Below [gravityform id="1" name="Contact Us" title="false" description="false" ajax="true"]
<!--googleon: all>